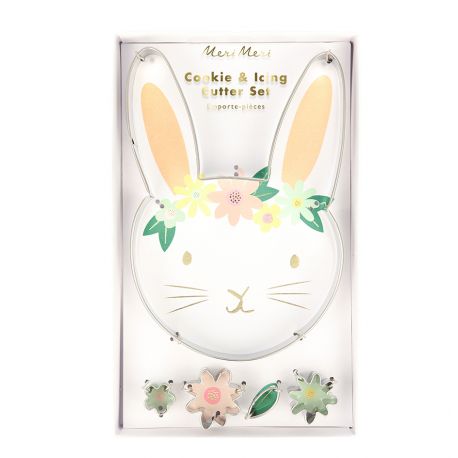 Make rabbit cookies together! This cheerful set contains a rabbit cookie mold and a number of smaller molds to decorate the cookies with. Perfect for Easter or a spring festival. Or all year round for the little ones who love rabbits.

Set for nice rabbit cookies. This Floral Bunny Cutter Set contains a large cookie mold with four smaller molds to, for example, stick out fondant and to decorate the cookies with. Package dimensions: 12.1 cm x 19.7 cm x 2.5 cm - The British brand Meri Meri started making sweet greeting cards in 1985 and, under the leadership of founder Meredithe, grew into a network of designers and artists who produce the best invitations, bakeware, costumes, gifts, party items and so much more. Their playful mantra is aptly 'we believe in childhood'.